Yup!  I just came back from my Mindanao trip!  I came home with no food so I had to go to the market and buy ingredients for my lunch and dinner.  Yes.  I cooked after traveling from Mindanao to Laguna–taking the first flight out, mind you.  What can I say?  I am like the 21st century’s “Woman of the 90’s.”

I bought the nicest tab-top curtains!  They were on sale (of course) at Php 200.00 per panel.  Hahahahaha!  I just hung it in our living room and boy did it make a difference!  Gay Homemaker’s Tip:  Better to buy tab-top curtains.  It’s fuss-free!  And don’t buy the ones with accents (especially those with buttons).  What you can do is to buy the simple tab-top curtains, then embellish with buttons (sew it beneath each tab) or tassels or French ribbons.  It is much cheaper and you can customize to fit your color scheme!  There.  I am really gay. Hahahahaha!

At the smoking lounge of the centennial airport.  Guess who sat beside me? (ready to explode)  POLO RAVALES!!! Eeeeeeeeeeeeeeeeeeeeeeeeeeeeeeee!!!!  Oh…my…God!  It was a real treat for the senses!  He was so yummy!  Eversince my husband, I have never met someone who has taken my breath away!  Fag Hag Extraordinaire, Weng and I were leik…you know…(tucks imaginary hair behind ear) we were sho shy and leik we wanted to take his pho-tooooo (stretched last syllable) but we were leik…oh no naman we’re not jowlowg noh its kehkehiyaaaaa (stretched last syllable).  (rolls in laughter)  But seriously, why did God create things that would make you commit one or more of the seven deadly sins????  And no!  I didn’t ask for his autograph or his picture….(walks out)

(walks back in…hahahaha! Continuity???)  Anyhoo, after leaving Polo Ravales and boarded our flight (we had to board our flight eventhough we didn’t want to), we discovered that the lives of the crew and the passengers were in the hands of a female pilot! Talk about women being on top eh?  You go, gurl!

Our meeting last Thursday was at Datu Paglas, Maguindanao–a town away from Tacurong City (yes, the site where a bomb exploded).  We went there via non-aircon bus.  Need I say more?  Since it’s a non-aircon bus, it had to stop at major towns…seven to be exact.  Not to mention 5 checkpoints where all men were ordered to de-bus while soldiers conduct their inspection on the bus.  (cue cloud callout)  Dude, I just flew in a plane yesterday flown by a girl.

I went to the ticketing office to redeem my miles so that I can take Jher with me to Cebu on the last week of May.  I discovered that I still have to pay Php 1,900.00 because the awards cover only the plane fare!  Pakshet!  I am still frustrated because I was looking forward to an Nth honeymoon. (cries)

I am taking the last flight to Davao on the 14th for a week-long monitoring with  our project partners.  Yes. I am leaving again.  (heaves a sigh)  I haven’t seen my husband yet and I am missing him soooooooooooooooooooooo badly. 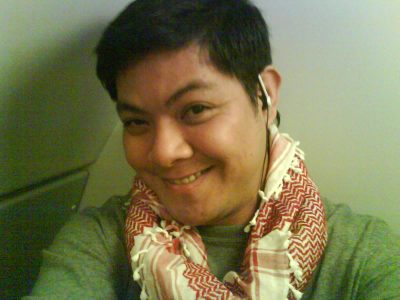 This entry was posted in Bridget Recommends, Comedy, My Life, Personal. Bookmark the permalink.